Respectfully Honour My Passion... for ISK (Where is Seraph Update)

It's been a minute since I've posted about what I'm up to, so here we are.

I'm back in NullSec.

Long time readers are probably thinking, "Seraph didn't you leave Nulli Secunda because you hated Sov Wars, didn't like massive fleets, couldn't stand Time Dilation, and logistical problems in NullSec made you want to rip your teeth out?"

Well yes, all of those things are true. But like an idiot, I'm back in again anyway, and things have changed. I can run my own logistics now I have a jump freighter (and cyno alts). My new alliance is currently neutral in the current "World War Bee" so there's no massive Sov fights, no TiDi, we're just chilling up in Deklein in a mixed German/English alliance and fighting off random gangs who come strolling through our space.

Specifically I've joined EoBesa Exports [E-B-E], part of the wider Federation of Respect Honour Passion Alliance [RHP]. Currently it's fairly quiet, though we've been skirmishing with WE FORM V0LTA who had dropped a Fortizar in our space, until we clapped it a couple of days ago with our blues (I wasn't on the mail due to RL getting involved, but I was there in spirit).

On a personal level, I've been moving in all my stuff, both PvP and industrial, and rapidly learning bubble mechanics which is an area of EVE I've not really dealt with before. I've joined in some POCO bashing fleets for our industrial guys to start dank PI farms and also joined a couple of standby capital fleets as a triage pilot during roaming gang response which (while important) didn't really go anywhere because nobody escalated. 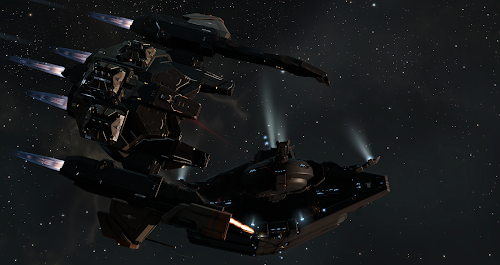 Killing POCOs with the boys

The making ISK front is pretty good, I started out ratting in an Ishtar while semi-afk ice mining on another character in a Skiff which was decent enough. I was getting 16-19mil "ticks" which worked out to around 48-57mil an hour, plus the ice income. Once Seraph moved out there too, I switched to dual Ishtars to smash through Haven sites which pumped my combined tick total to around 32mil, which is 96mil an hour. Not bad.

Then I started doing short notice Jump Freighting on behalf of the alliance.

So Jump Freighter pilots, despite the similarity in skills for most capitals, are relatively rare. I think in my corp there's only three or four including myself, and across my alliance I'd estimate less than 30. I'm not sure why this is, but the hull cost is pretty extortionate (average 9bil) so I imagine that plays into it alot.

A couple of nights ago there was an emergency ping on alliance Discord for a very short notice emergency move op. I x'd up as a JF pilot along with three others and got dragged up into the higher tier TS3 channels, usually reserved for corp CEOs, alliance leadership, and the top FCs. My eyebrows were hitting the roof. I was told to totally fill my fuel bay and standby in our capital system for a rapid move.

After around 20mins of sitting around in the move fleet and wondering what was going on, we got the order to undock and in beautiful synchronisation, the four of us made the heavily scouted, very hush hush move in less than twenty minutes. 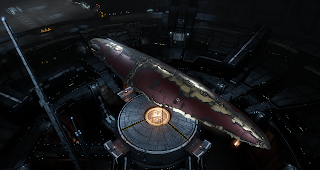 We were told nothing about our cargo, or where it was being delivered up until the last second. Our jump midpoints were unknown to us until they were lit. Due to current OpSec I can't even say where we took it to or what it was.

I can tell you that my cargo bay alone was worth over 18bil and, out of the four Jump Freighter's cargoes, mine was the second cheapest there.

Within an hour of leaving, we were back home. One of the more experienced JF pilots was asked how much we wanted for our services to the Alliance. He replied

"Fuel cost, plus whatever you think is fair for a short notice op"

"How much is a full fuel tank?" said the Op lead.

"Rgr, wait one, all JF pilots x in fleet please"

I'm sat there thinking, cool, I won't have to pay for fuel and I'll probably get like 100mil or so. My wallet flashes.

I was ecstatic. I immediately used the money to help buy an Apostle + fit and started looking for other people in the alliance who needed stuff moving on discord and ingame. I was soon contacted a few days later by an alliance member who need three JF loads moved from LowSec to our capital building system. I spent about two hours on Saturday morning organising my alts for my midpoints and scouting out the route. The jump itself was done within twenty minutes.

That paid for a Minokawa + most of a fit.

By this point I was going ISK mad and started asking my corpmates what I could do with a large amount of ISK to make MORE ISK.

"Buy a Rorqual, mine out half the system, build capitals"

"Stock our market and make billions passively" ...Wait what.

I checked out the market. Not much wasn't available but almost everything was 20-30% above Jita sell price. I bought a load of stuff in from Jita I thought people might need (drones, fuel, doctrine hulls, mining gear, ammunition, about 1 billion in total) and threw it up the market. I put some fitted doctrine ships on contract for 15% markup. I checked my estimated revenue.

"Wow" I thought "do people actually pay this much?"

Turns out yes, yes they do. 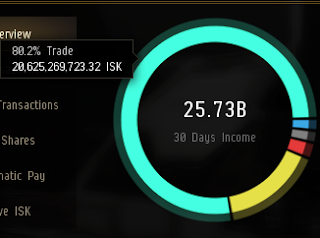 Obviously alot of that ISK is "recycled", i.e I put the profit straight back into restocking the market, so that 20bil is a little misleading, but I have 6-7bil in market sell orders and as soon as stuff sells out I replace it. I've also bought two FAX + fits (admittedly mostly using JF pay), a regular freighter, about three fuel loads for my JF, a load of doctrine PvP ships (Caracals/HACs/battleships/force recons/bombers/interdictors), several assorted T2 Exhumers, and an Orca and my wallet hasn't shifted much overall, but it's shifted upwards.

Anyway, enough circle jerking about my wallet, I've got Part 3 of the Epic Arc experiment to write, and I'm cooking up some new ideas on the Abyss running front, so look forward to those!

Until then, fly safe o/