So unfortunately due to corrupted notes on my computer, I'm missing the loot/salvage and bounties data from the following missions:

We can work out bounties that I probably would have got based on EVE Survival data, and I'll use the missions with similar amounts of ships to work out average loot value (minus about 10% value to allow for drop rates). I won't include agent pay because it's low enough to not matter alot in the final total.

So Hunting the Hunter, I estimate 15mil in bounties and 8mil in loot/salavage.

And Catching the Scent, I estimate 25mil in bounties and 14mil in loot/salvage.

We're ignoring Fate of a Madman because as I said earlier, it's a choose your path mission, not a fight and kill one.

So, on to the next mission. For those following at home, when we last left off I had been directed to destroy Rahsa's Fleet and capture the man himself (which we did). We then took him back to be interrogated (this was the storyline choice), during which he revealed that he hadn't been working alone but he managed to commit suicide before the interrogators could get a name. In order to track down the accomplice I was sent to retrieve a Sansha Command Signal Receiver from the stragglers nearby by killing them all and looting their wrecks. We've now returned from that mission and now we have been given a fake Sansha distress beacon built from the Command Signal Receiver to bait the accomplices back into the system.

Also, I want to note that I have returned to this Arc with the fresh Marauder buffs from the Bastions of War update (double rate of fire in Bastion), so I'll comment on how that feels in the conclusion. Spoiler, it's OP

I flew over to Shaha to place the distress beacon in a broadcast array hub, landing around 20km from it as I warped into the pocket.

I placed the beacon, and was soon joined by a couple of battleships and cruisers which were rapidly dismantled by blazing laser justice. I won't wax lyrical about laser death again but trust me it was just as glorious as ever.

After easily wiping out the small force that came to kill me, it was apparently "obvious" from the wreckage that the traitor was Commodore Harkan according to my agent.

Don't worry, I have no clue who he is either.

I was told to arrest Harkan so he could answer for his crimes. An uneventful few jumps later and I was on his doorstep in Polfaly. The big man himself sent me a message.

Hey that sounds totally safe, man without a face! I pootled over towards his mansion to arrest the naughty sausage, when suddenly...

I reported to my agent that Harkan had seemingly committed sudoku, and was ordered to go inform Riff Hebian; our buddy from a few missions ago.

Yes I literally got payed to fly to him and start a conversation.

Riff told me my "final" task was to wipe out the last of the Sansha who were preparing to mount a desperate last attack against the local Lord. Sounds easy enough! I flew over the two jumps to Moniyyuku and prepared for battle.

Well that doesn't sound suspicious at all.

The mission objective tried to get me to focus on the energy neutralizer sentry but I decided to start melting through the ships, since apparently there was a lot of waves. Sadly I only got through three waves of each cruiser/frigate group before they all warped off and the mission was flagged complete. I killed the sentries so I could salvage in peace, noting that EVE Survival warns you that the neut sentry has a "massive tank".

It died in less than 20 seconds.

Looting and salvage complete, not that there was much, I returned to Palas to report to Riff only to find things had gone batshit crazy since I had left.

Total ISK - Panic Response
Pay + Bonus: 2.2mil
Bounties: 1.6mil
Total for this mission: 3.8mil
Loot/Salvage was estimated at 490k
So it turns out Harkan isn't dead (shocker, who saw that coming?) and he's at the Lord's safehouse right now trying to kill him! Truly disgusting behaviour.
We flew best speed to Choga to defend our man. Landing in the first room, we slaughtered the Sansha forces guarding the gate. This seemed to piss off Harkan. 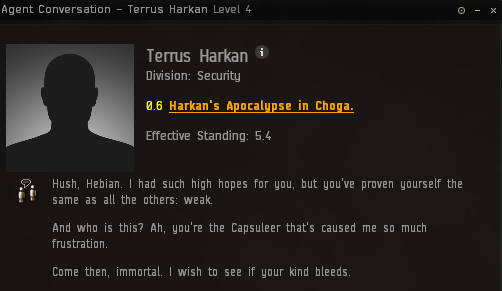 Well challenge accepted my guy, let's rumble.
I made short work of the second pocket while Harkan got political with me. It was pretty hard to hear him over the screams of his men as they were incinerated with bastion-boosted Conflag laser beams, but he seemed pretty upset about the Empress or something? I'm nothing if not a simp for Empress Kamyl so now he definitely deserved to die. 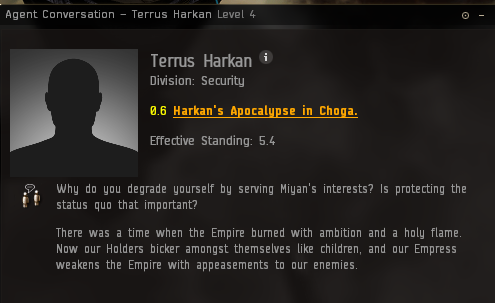 I warped into the next room, lasers set to justice. Once again Harkan babbled on about politics and weak rulers while I put his followers to the sword.
With only the loss of a single Hobgoblin II (RIP little buddy) I moved on to the third room. EVE-Survival notes that the important thing in this room is the trigger control based on how much damage you do to the initial BS spawn. I decided to micro jump out and fight this room from Scorch range to keep things simple.
As each new spawn came in I held DPS off the first BS and killed the new spawn, but honestly I think I could have killed it from range and then killed all of the spawns before they reached me, 1600 Scorch DPS from 100k is incredibly powerful, jumping up to 2600dps once they get into Conflag range at around 60km. As it was, I didn't even lose my shield clearing this room.

I cleared the loot and salvage off the field, dropped everything in a station because my hold was nearly full, then headed into the final room for the boss fight.

EVE Survival warns there's alot of waves in this fight but honestly I didn't think it was that bad. Pretty sure there's more waves/ships in a L4 Pirate Invasion mission, and it wasn't hard to tank Harkan, just the occasional rep pulse, even though admittedly I had bastion helping out with both DPS and tanking.

After everything was murdered, I returned to Riff Hebian for my reward.
Total ISK - Right to Rule
Pay + Bonus: 1.4mil
Bounties: 27.7mil
Total for this mission: 29.1mil
Loot/Salvage was estimated at 20.5mil

Riff went on and on about how great I was, then handed me the implant I had lusted for for some months now. I had completed the Amarr Epic Arc!

The implant itself is estimated by EVE at 277mil, which is pretty nice but the market seems closer to 230mil (still not bad).

So I guess I answered my original question, though I'm a little disappointed with the answer. Atleast with the implant included the total ISK is over 500mil but I was hoping for higher.

If I did this sort of thing again, what would I change?

1) I think a Marauder is major overkill for Epic Arcs especially after the DPS buff in Bastion. As fun as it is to wipe out rooms in less than 30seconds with nearly 3k DPS, you spend most of your time moving between systems instead of fighting so a T3 cruiser or similar would be more time efficient if you're just farming the implant/faction standing.

2) I would definitely use a spreadsheet to record my results. Manually going back through a notepad on my PC and adding up the numbers would have been so much easier on EXCEL or a similar tool, and much easier to see overall.

Thanks for reading this far, especially if you had the patience to read the entire series!