So as I've been talking about for my last few posts, this is going to be my mini-guide to using the Vagabond Heavy Assault Cruiser in Electrical Abyss Filaments, specifically T4s (Raging). It's possible to upgrade the fit a bit and fly in T5s (Chaotic) but I have not yet made this switch, and I'm comfortable in T4s for now. I may update this guide at a later time with a T5 fit and associated tactics. 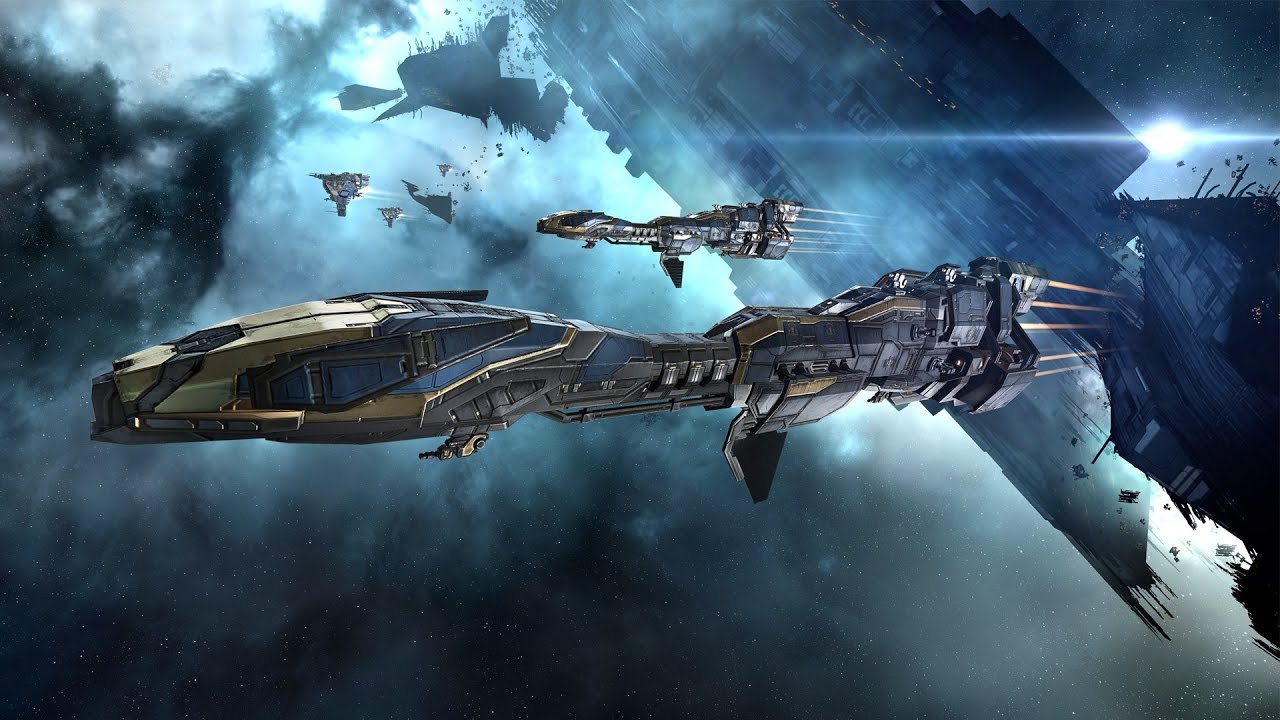 So first things first, I cannot claim full credit for this Vagabond fit. I took it from a Reddit post that was made a year or so back and I adapted what was written there for my own purpose. Full credit for the initial fit is given to u/SuigintouKurotenshi.

However to avoid simply stealing a fit, changing it a little and just claiming all the hard work, I'm going to talk about the benefits of the Vagabond over other ships, how to fly it, and discuss options you have to downgrade for budget reasons.

Without any further ado here is the fit: 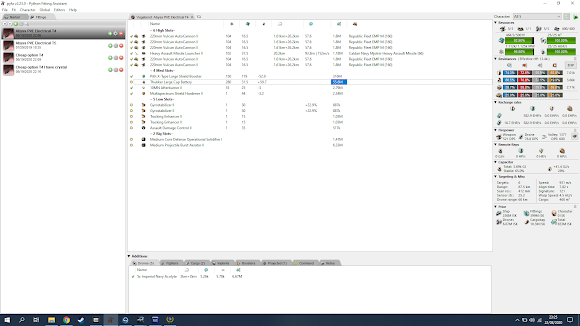 Stats from PYFA, all V skills and Electrical Filament applied

Compared to some ships you see fitted for the abyss this Vagabond is fairly cheap. Current prices are around 660 million (Jita) and no implants or drugs are required to make this work, however I am personally using a full set of "Basic" implants plus these hardwires:

There's some pretty good reasons to run the Vagabond over other popular Abyss ships (e.g. the infamous Gila)

The only real downside to the Vagabond that I have found is that it has a relatively high ammo consumption compared to other ships. Otherwise there are very few things I can find wrong with it.

First of all I would always recommend flying a ship you're a novice with on Sisi (Singularity Test Server) for atleast 8-10 sites. This is the ideal test bed for trying out a new ship/fitting changes or risking a cheap modification to see what you can get away with. If you're unsure of how to connect to Sisi, it's very simple.

That being said flying this Vagabond is extremely easy, and if you just want to hop straight in to T4s without trying it on Sisi this is probably one of the few ships you could get away with that, as the margin for error is fairly forgiving.

Additional steps as required:
As you can see, very easy and requires little thought once you've practised a few sites. Obviously if you see big bois like Karen or Overminds, be very careful not to fly straight at them because they have LOLALPHA and can literally two or three shot you. 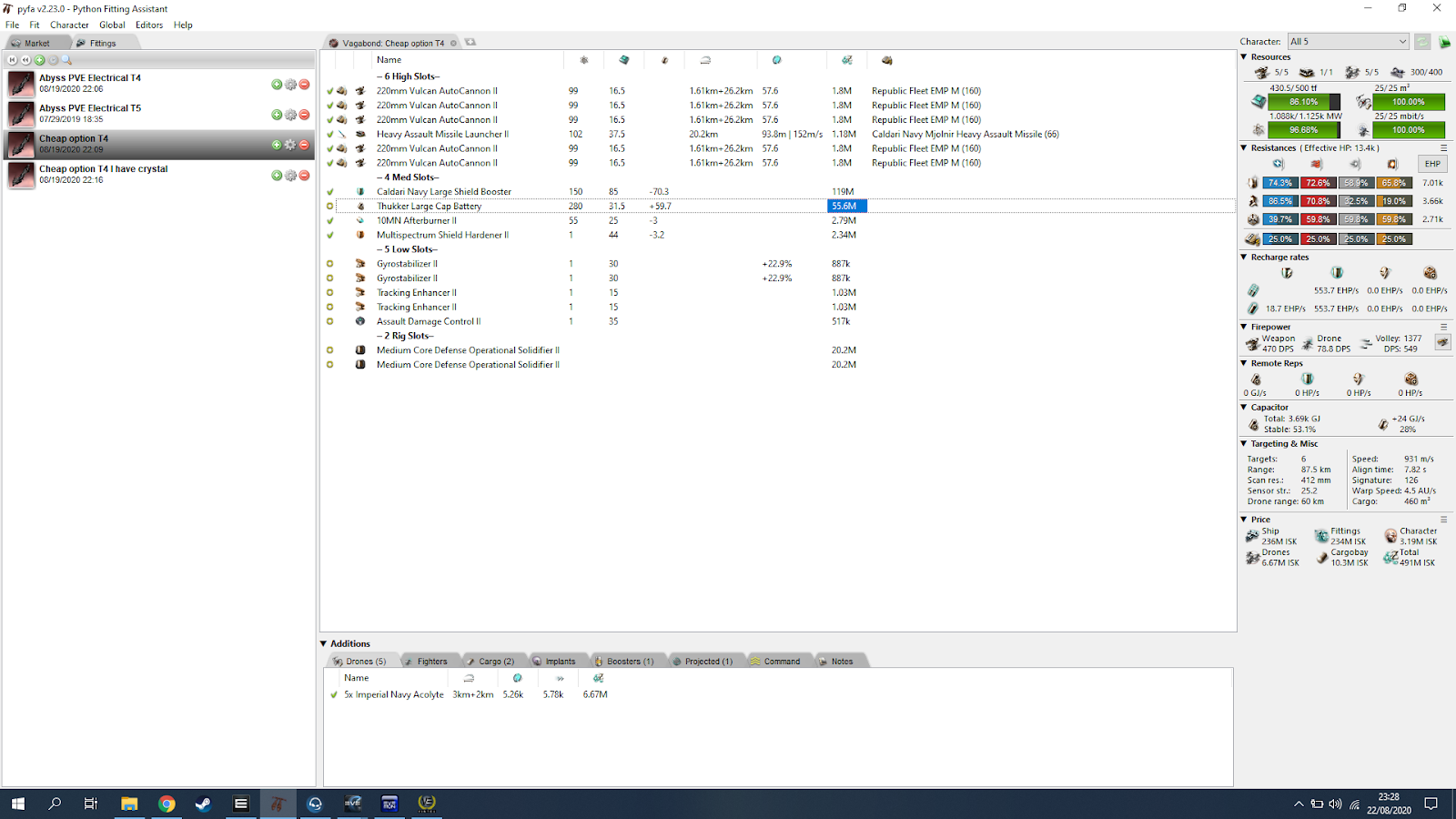 Stats from PYFA, all V skills and Electrical Filament applied
So, what do you lose? Honestly not too much.
Tank drops to 527 ehp/s vs 582 ehp/s
DPS (including drones) drops to 549 from 600
Cap is 53% stable compared to 65% stable (due to extra shield repping rig)
If you're willing to throw two 3% DPS implants in, specifically Med Proj 803 and RF 903 (approx 40mil total) you can knock the DPS back up to 576 including drones which is pretty solid.
Full disclosure, I HAVE NOT FLOWN THIS CHEAPER FIT IN T4s, IT IS THEORY ONLY AS OF WRITING THIS GUIDE.
However with that being said the minor loss in DPS should only effect site times by a minute or so at most (expect average to be around 12-14mins rather than 10-12) and I've never struggled badly with tank to the point where 55ehp/s would make or break a run. If you're concerned that less tank is a really bad idea, you could pop a Synth Blue Pill (300k ISK) which brings you up to 543 ehp/s (only 39 ehp/s different) or even pop a Nugoehuvi Synth Blue Pill (3mil ISK) that gets you to 553 ehp/s, which is only 29 ehp/s less.
There's alot of options with this. Play around in Pyfa/your favourite fitting tool and see what you prefer. Obviously if you have a Mid-Grade Crystal clone lying around, you can just fly with a cheap faction shield booster and get pretty much the same tank out of it as a X-Type SB.
So that's the fit/guide/TED Talk. Let me know in the comments if you have any questions or just shoot me an EVE-Mail if you prefer in-game. Next few days I should have a Part 2 out for the Epic Arc Experiment and I'm currently moving home on two characters so I'll discuss that in a future post also!
Until then, fly safe guys o/