The Amarr Epic Arc Experiment (AKA, I didn't want to buy an implant off the market) - Part 1

Recently in my tweaking of Abyssal ship fittings in Pyfa, trying to find the most efficient tank that lets me focus on DPS (was there ever a nerdier start to a nerdy post), I stumbled across the existence of the "Imperial Navy Modified 'Noble' Implant". If you've not seen this before, here's the effects: 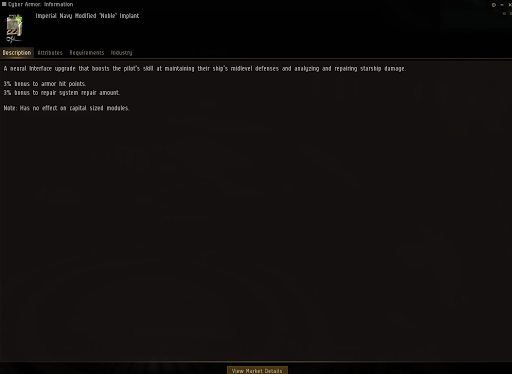 I stumbled across it because I was trying to find a Slot 10 implant that would benefit my Ikitursa some way, and since there's no DPS implants for Entropic Weapon Systems yet my choices were pretty thin on the ground, to the point I was running Slot 10 empty in my Ikitursa clone. Sure, there's some % increase to armour implants, but Firestorm filaments increase your armour anyway, and it would be unlikely that a 5% armour increase would noticeably impact a rep/resist fit Ikitursa. But then I saw the Noble implant, and I was curious. Nearly 250mil? I can probably just use my Amarr corp LPs and get one cheaper.

...Wait, it's not in any LP store. Where the hell does it drop? A swift Google later provided me with the name of the Amarr Epic Arc Mission, "Right to Rule".

"How weird" I thought. "I've played EVE on and off for nearly a decade, and I've never once done an Epic Arc".

Then I had an idea (a stupid one). Why bother paying 250mil ISK for an implant when I can just spend over a billion on a new ship, run a set of missions I'd never done before, and find out approximately how much you get for clearing every single mission in the Amarr Epic Arc (including looting and salvaging the field). Thus, the Amarr Epic Arc Experiment was born.

First things first, I went to Jita IV-IV, the largest market in New Eden, and bought the stuff we're going to need. A quick scan of the EVE Survival pages showed missions with lots of pockets, multiple waves of Sansha pirates, lots of EWAR, a random hacking mission and the potential according to some commenters, for a dip into LowSec.

My first thought on reading all this, was naturally the Paladin Marauder. 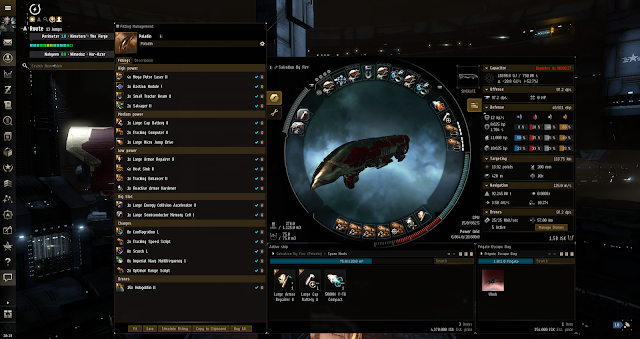 You can see in this screen capture the fit I settled on. All T2 because faction fit marauders are gank bait, and the DPS gains aren't significant enough for me to want to upgrade. The three modules below in the cargo bay are for refitting as required, and the Probe in the escape bay is for the data analysing/small courier missions that may crop up. EFT text of the fit is below if people would like to use this.

Final cost was around 1.5bil for the ship hull and fittings. Please be aware, I'm using my Mid-Grade Asklepian set that I usually run for Ikitursa Abyssals (No Omega) so the tank is better than Pyfa initially suggests, plus I have pretty much all relevant skills for this fit at V (including Maurader V). If you’re a beginner Marauder pilot, I’d drop a Heat Sink II and add an EM Hardener or a Multispec Membrane. Bastion is pretty crazy with a three slot tank, and you can always use MJD as your GTFO button. I also have my alt following me around in an Orca, to carry spare ammo and any loot I find but you could just dump it in stations and collect it later with a cheap hauler.
In order to accurately measure how much I was getting paid through the duration of the Epic Arc, I set my corp tax rate to 100% and emptied both my character wallet and corp wallet into an alt. Since it's just me and my alts in my corp, I wasn't going to accidentally take somebody's ISK by doing this. I also decided (as mentioned) to keep all loot in an Orca, to keep it clearly separate from the rest of the trash I keep lying around the stations I live in.
Chapter 1 - Missions and ISK
Anyway, now we have our ship, first thing is to talk to the initial Epic Arc Agent. She's pretty easy to find via the Agency tab in your Neocom, and bonus is, you can accept her task remotely. 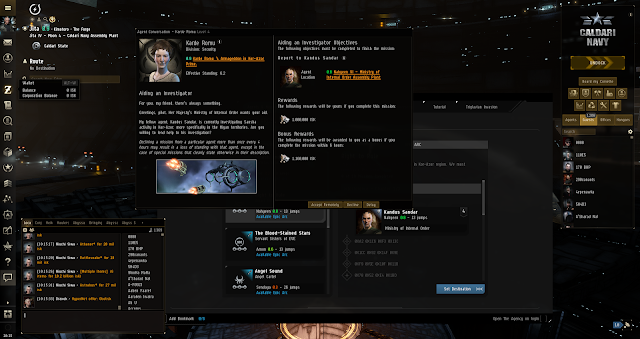 I got directed to go talk to some guy called Kandus Sandar in Nahyeen. A few warps (okay more like twelve) later I was knocking on his door, and he directed me to go kick the crap out of some Sansha that were cluttering up a nearby system; Andrub, and take some reports that should have been delivered to him a while back. During this, I got paid around 2mil by the first Epic Arc Agent I spoke to just for chatting. Nice. Time to root out some Sansha.
I arrived after only one jump, and was greeted by an exploded spaceship as I warped in. 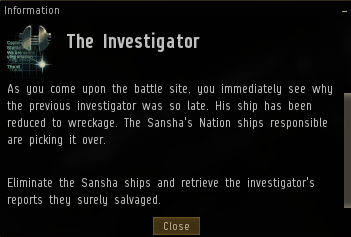 The pocket was pretty easy, all spawns were around 20-45km from me, which was in perfect range of Conflag. My tank only really got used by the last spawn, which required me to occasionally cycle my rep while my laser beams melted through pirates like a hot knife through butter.
After looting and salvaging the field I docked back up and spoke to the agent again. He told me the reports indicated an attack by the Sansha in a local system, and he wanted me to go surprise them.
Total ISK - Aiding an Investigator + Late Reports
Pay + Bonus: 4.5mil
Bounties: 9mil
Total for this mission: 13.5mil
Loot/Salvage was estimated at 4.3mil
I headed off to the next system, Chaktaren to kick some more Sansha scum to the curb. 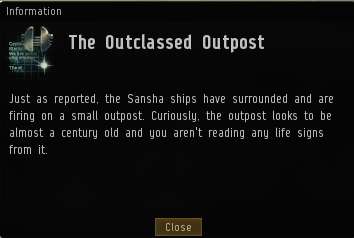 Again, easy pocket, initial spawn was within Conflag range, then the next two spawns needed Scorch (60-80km away). Tank wasn't bothered at all by this mission, ran the rep twice. Looted the field and handed the mission in remotely.

Upon reporting to the Epic Arc Agent, I was told there was another attack in the system, being led by a mysterious Sansha commander. I was directed to engage immediately, so I warped in, ready to smash some pirates.

This mission was relatively tougher on my tank (i.e I had to cycle occasionally) but bastion kept things simple. Pretty much everything was within 45km so between Conflag and Multifrequency nothing stayed alive for long. Unfortunately as soon as I damaged the commander, he warped out. I suspect I'll be seeing him again soon. The rest of his fleet wasn't long for the world, and I looted everything after. A quick report back to my agent on completion confirmed my suspicions, I was on the trail of the Sansha Commander.

Once again the mission was in the same system I was already in (Chaktaren), so it made it pretty easy. On warping in I primaried the neuting towers and sentry towers with Scorch, then went to work on the battleships. Didn't take long to melt them down, and the second wave spawned in range of Conflag, so they didn't last long either. 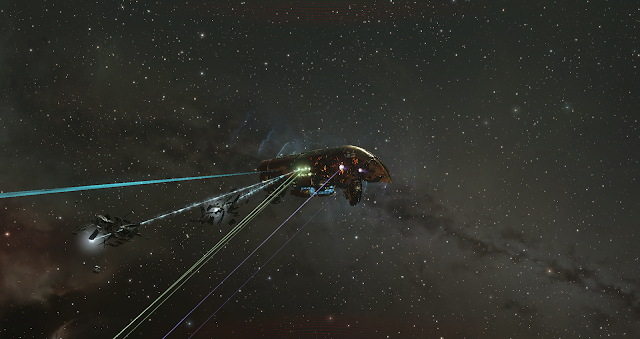 I looted the field while MWDing to the acceleration gate. On arriving, I refitted the MWD back to a MJD, then headed through. The next pocket was fairly simple, but just to be safe I jumped to 100km before trimming the field down with Scorch at 100km. After the first two waves were gone, I jumped back to finish off the rest with Conflag. Sitting on the gate, I tractored in the loot, then headed through into the last room. The last room was in perfect Conflag range again, so it was melted within minutes, no issues with tank. Due to the ships being Imperial Navy in the last pocket, not Sansha, most of the ISK worth was in tags. There was enough loot to clog up my cargohold, so I ditched it into my alt's Orca and reported to the agent that the target had escaped.

The agent was shocked to hear that Imperial Navy ships had been attempting to stop me, and sent me to speak to Aralin Jick, a contact who could move without the same red tape, thus concluding Chapter 1 of the Amarr Epic Arc. My total ISK so far (assuming loot/salvage estimates are accurate) is around 131.4 million ISK, plus a big standings increase with the Ministry of Internal Order.

I’ll start on Chapter 2 this weekend so look out for that! My next post however is likely to be an Abyssal Deadspace guide, focusing on a Vagabond for T4 Electricals which I’m drafting as you read this. I’m hoping to do several Abyss ship guides and create a “quick and dirty” reference to use when flying them, but we’ll see how I go.

Until then, fly safe o/