Unfortunately, I've had some internet issues over the last few days so I've been loathe to run Abyss sites due to the risk of disconnecting. I've drafted most of the Abyss Vagabond post, but I want to get some screenshots of the ship in action and edit it down a bit more first, which is going to require my internet improving (should be back to normal by Friday night).

Instead, I've been doing some more of the Amarr Epic Arc, so that post should be out sooner than I expected, probably the day after I post my Vaga guide (just to keep the blog view numbers up obviously).

In the meantime though, how about Niarja falling to the Triglavian Invasion?

Despite apparently bitter resistance from EDENCOM forces, the Trigs have triumphed and made Niarja permanent (?) LowSec by achieving "Final Liminality". 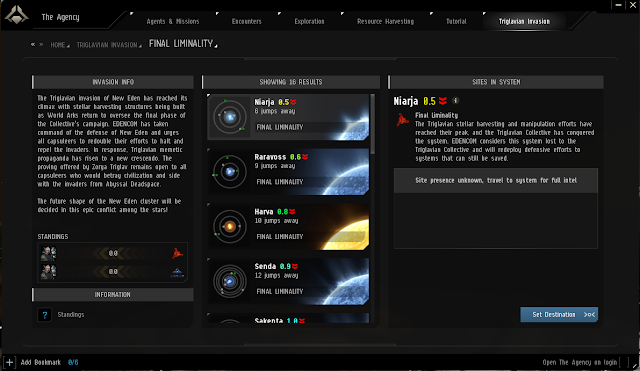 Wewww boys, I am looking forward to this change. Despite the fact I'm half HighSec Carebear, half washed up solo LowSec PvPer, at heart I'm secretly an RP nerd, and the potential that Amarr will be a real regional trade hub again, like it used to be back in 2011 when I started EVE really rustles my jimmys in an exciting way.

Worst case scenario, Amarr stays a mostly dead backwater and the poor saps I pay to haul my ships from Jita to wherever I'm about to lose them will have to fly more jumps and I'll have to throw them some more pennies.

Best case, I set my market/hauling alt up to help build Amarr as a regional market powerhouse and I get the double line of mad ISK and dank RP straight into my goddam veins.

I'm also looking forward to the shiny killmails of people who didn't pay attention to the LowSec change and fly expensive freighters into Niarja completely clueless of any danger!

Until next time, fly safe o/